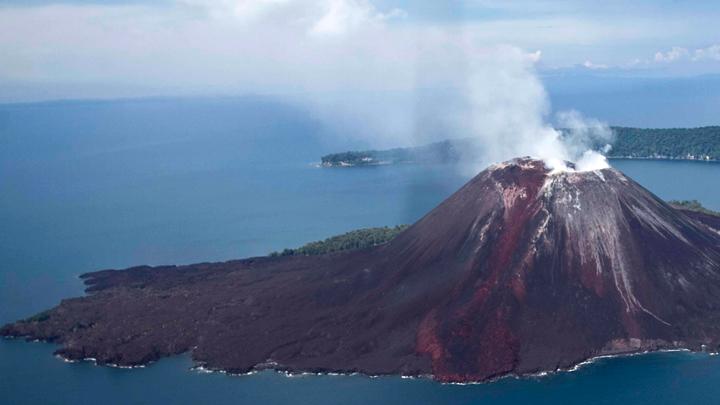 On 1883 at Sunda strait, Krakatoa (Krakatau) erupted. Eruption so big, half of Krakatoa Island was gone. This eruption is one of deadliest and destructive volcano eruptions in modern history, killed at least 36.417 people because the eruption itself and the tsunamis.

Seismic activity happened several time in Krakatoa Island. But the biggest eruption happened on 1883. In the early stage of the eruption, seismic activity around Krakatoa was very high, causing earthquakes that could be felt from Australia. On 20 Mei 1883, steam started to came out regularly from Mount Perboewatan. Volcanic ashes were released and reached 6 km high. The sound of eruption reached Batavia (now Jakarta), 160 km from Krakatoa. Volcanic activity dropped at the end of May, and no further activity until several weeks. Volcanic activity happened again at 16 June, causing the island covered by thick black smoke for five days. The tide around became very high, earthquake happened in West Java.

The climax started to happened on 26 of August 1883 around 14.00. The black smoke reached 27 km high and eruption happened continuously and the sound of explosion could be heard every ten minutes. Ships sailed on 20 km area were hit by big chunk of pumices with 10 cm in diameter. Small tsunami hit Java and Sumatra almost 40 km from Krakatoa at 18.00 and 19.00.

On 27 August 1883, four big eruption happened, each followed by tsunamis reached 30 m height in several places. Areas in Sunda strait was affected by pyroclastic flow. Rain of hot volcanic ashes fell down at Ketimbang, Lampung and around 1.000 people died because of it. It wiped Sebesi Island, 13 km from Krakatoa, and not one of 3.000 residents of Sebesi Island were save from pryroclastic flow, volcanic ash, and tsunami. The energy released from the eruptions was estimated to be equal as 13.000 times of Hiroshima and Nagasaki atomic bomb. On 10.41, half of Rakata collapsed on final eruption.

The colossal final eruption pressure came out from Krakatoa with 1,806 km. hour in speed. It was big; it destroyed eardrums of poor sailors that were sailing at Sunda strait. It was causing a surge of pressure and it was read by Barographs all over the world for five days. The volcanic smoke reached 80 km high. Tsunamis wave reached Hawaii, west coast of Central America, and Arabian peninsula. For several days, people of Jakarta and Lampung could not see the sun because of the smoke.

The volcanic activities were declining after that. On morning of 28 August, Krakatoa went silent. Small eruptions happened until October. Cities in northern Java and part of Sumatra was destroyed, the effect of tsunami reached 40 km inland. Mount Perboewatan and Danan with half of Krakatoa Island was gone. The Rakata volcano collapsed along vertical cliff, half of its cone was disappeared.

Forty years after the eruption, a volcano appeared known as Anak Krakatau or Son of Krakatoa. This mountain has been growing for about 0.5 meter per month. Now son of Krakatoa has reached 450 meter and still active and growing. Son Krakatoa is now one of popular tourist destination.

Son of Krakatoa as Tourist Destination

Domestic tourist, especially from West Java and Lampung are visiting Son of Krakatoa because it offers an amazing view, superb snorkeling spots, and knowledge about Krakatoa. This destination is quite a challenge to reach and there are no big hotels near by. If you’re up for adventure, then you can try visit Son of Krakatoa.

Usually, tourist comes as a group to press the budget on minimum. There are no regular transportation to Son of Krakatoa so tourist should rent a boat. It is the most practical way, the boat can take people to snorkeling spots and to hop island. One small boat can bring up to 15 people.

From Jakarta, you can fly or sail through Sunda strait to Lampung. From Canti port, Lampung, you can rent a boat and they will take you to Sebesi Island. It is nearest inhabited island from Son of Krakatau, Sebesi Island is alive now, government of Indonesia put a transmigration program, and now the population of Sebesi Island is about 2.000 people, mostly came from Java. There are rooms for rent on Sebesi Island. A lot of resident’s houses also used as homestays.

Son of Krakatoa located about two hours sail from Sebesi Island. There you can see for yourself the half cone of Mount Rakata and you can grasp the magnitude of 1883 eruption. Son of Krakatoa sometimes closed when the seismic activity is high. When it is open, you can hike to the top and see Rakata, Panjang, and Sertung Island. You can learn about succession of vegetation and fauna after it wiped clean by the eruption.

Beside hiking the Son of Krakatoa, you can also snorkeling around Rakata Island in a spot called Cabe Lagoon. The underwater live is rich and beautiful. Fishes so bright and colorful and also various shape of corals can be an amazing experience. Another place you where you can play around, swim, and snorkel is Sebuku Kecil and Sebuku Besar Island. This trip will show you how pretty Indonesia is.